PV technology maintained two serious flaws that prevented him from competing in rate parity . One was the high price of facilities and other was the lack of controllability of the energy produced . It is said that power generation technology is adjustable when an installation can be exploited to the percentage of its rated load as required without losing efficiency and also without time limitations in its ability to provide power.

Solved the economic problem, a pathway for the accumulation of PV electricity produced for subsequent discretionary use at any time opens.

Hydrogen gas (H2) is a very high calorific value fuel , tripling that of natural gas. The cleanest and easy way to produce this gas is through water electrolysis . The simplicity of this technology allows integration into any isolated PV system of average size.

However, the dissociation of the water molecule (H2O) into hydrogen (H2) and oxygen (O2) demand a high amount of electricity that can be estimated in 54 ( kWh/kg H2) ​​for commercial electrolysis equipment (electrolyzer).

Is this the reason why electrolysis produces only 4% of the hydrogen produced worldwide.

However, a plant that incorporates an isolated PV system rarely gets use all the electricity produced by itdelf. Usually, manufacturing plants are operated 240 (days/year),and ,rarely, exceed 300 (days/year). In addition, the power consumption of a factory, only reaches peak nominal installed capacity at times. Thus, an isolated FV always generate electricity that can not be used in the consumption of factory process in which it is located.

Any process that is incorporated into the manufacturing activity and absorbing the energy not demanded by the plant, will receive a zero energy cost. 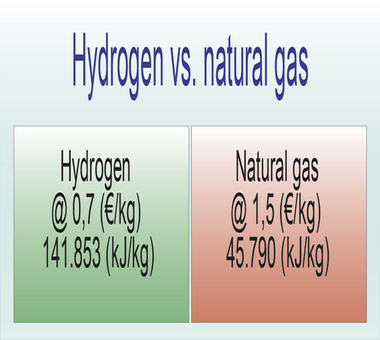 Therefore, an electrolyzer with compressor and a storage tank, will produce hydrogen at the only cost of equipment depreciation amounting to 0.7 (€/kg).

Assuming that natural gas costs 1.5 (€/kg) in 2013, and its calorific value is less than one third that of hydrogen, the cost of hydrogen generated will be one sixth of the natural gas price.

Once generated, compressed and stored the hydrogen, there are two ways of energy conversion.

By direct combustion process in boilers, after a reform of the gas burners. The cost is minimal, and is due to changes in burner.

Or the use existing generators, after economic conversion to hydrogen consumption . This electricity will cost approx., 1 (c€/kWh) which is equivalent to the amortization of hydrogen generation system and the adaptation of the generator. Not added to the cost of generation; applies one or the other.

A symbiosis between the two technologies is produced by closing the energy cycle FV isolated network with costs can drop to 95% of those supported by most factories.

As a plus, this cycle does not release carbon to the atmosphere. It could be classified as zero emission process. However , given that the PV trackers that generate electricity, were manufactured in our Jerez plant, Galio 1, exploited as renewable electric island without carbon emissions, the manufacturing process carried out by our client goes beyond zero emissions, in what we metaphorically call an absortion carbon process. 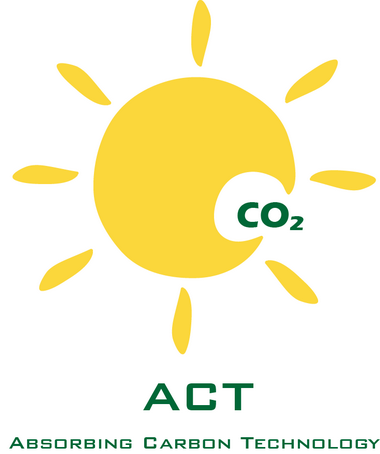 The production of hydrogen by electrolysis of water, generates in parallel oxygen. Because it has little use in conventional factories, therefore poured into the atmosphere.

However, the oxygen produced has a very high added value in the aquaculture industry or in water purification systems.

A fish farm requires large amounts of oxygen to air their pools, thereby assuming a costly input for this industry.

This technology produces oxygen as a free subproduct, not even required to compress and store it, only being injected directly to the oxygenation system of the farm.

This technology produces oxygen as a free subproduct, not even required to compress and store it, only being injected directly to the oxygenation system of the farm.